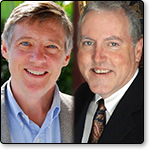 Jerry Newcombe & Mark Beliles  |  7.11.2016
In this second interview about Thomas Jefferson, we move beyond evidence from history to the very basis for our religious liberty. What did Jefferson actually mean when he mentioned a “wall of separation between church and state”? Why did he create a Bible that was devoid of many of the miracles of Christ? The answer may surprise you. Beliles and Newcombe argue that Thomas Jefferson, the primary author of the Declaration of Independence and third president of the United States, would argue still today for the full freedom and exercise of religion.  |  Link