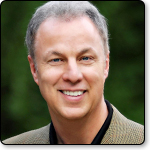 Richard Blackaby  |  7.9.2012
Richard Blackaby has served as the president of Blackaby Ministries International since July 2006. Richard is the oldest child of Henry and Marilynn Blackaby. He has been married to Lisa since 1983. They have three children: Mike just graduated from Southeastern Baptist Seminary and now serves in a church in Georgia, Daniel just graduated from North Greenville University, married, and now attends Golden Gate Seminary, and Carrie is a university student. Richard and Lisa reside in Greenville, SC. | Link