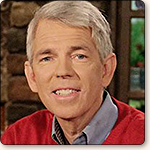 David Barton • 7.1.2019
David Barton is the Founder and President of WallBuilders, a national pro-family organization that presents America’s forgotten history and heroes, with an emphasis on our moral, religious and constitutional heritage. David is the author of numerous best-selling books, with the subjects being drawn largely from his massive library of tens of thousands of original writings from the Founding Era. A national news organization has described him as “America’s historian,” and Time Magazine called him “a hero to millions – including some powerful politicians.” In fact, Time Magazine named him as one of America’s 25 most influential evangelicals. Link