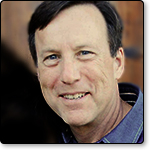 Doug Clark  |  9.5.2016
In 1990, Doug Clark had no idea how his effort to organize students in prayer would impact the world, through what has become known today as “See You at the Pole.” This global day of student prayer began as a grass roots movement with ten students praying at their school. Now, more than 25 years later, millions of students pray on their campuses on the fourth Wednesday in September. See You at the Pole is a student-initiated, student-organized, and student-led prayer rally, bringing students around their school flagpoles before school to lift up their friends, families, teachers, school, and nation to God. Learn how this movement began and how you can take part.  |  Link