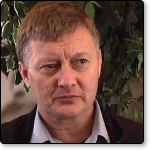 Dr. Peter Hammond  |  9.12.2016
It is sometimes difficult for us to relate to Christians who struggle to survive in parts of the world where persecution is rampant. In this interview, we will gain an inside looks at such scenarios through the eyes of Peter Hammond, Founder and Director of Frontline Fellowship. For over 33 years, Peter has pioneered missionary outreaches in many areas, including the war zones of Mozambique, Angola and Sudan. Often travelling by off road motorbike, Peter has travelled hundreds of thousands of kilometers to deliver Bibles to persecuted Christians in Africa and Eastern Europe. In the course of his missionary activities, he has been ambushed, come under aerial and artillery bombardments, been stabbed, shot at, beaten by mobs, arrested and imprisoned.  |  Link