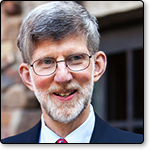 Marvin Olasky  |  11.30.2015
What caused a young Communist to abandon his atheism in favor of belief in the God of the Bible? And how did the same person then become a prominent voice for biblical Christianity? Marvin Olasky, editor-in-chief of WORLD Magazine and the author of more than 20 books tells his story to inspire each of us to believe that our faith has potential to impact and change our culture. Marvin worked at The Boston Globe, taught at the University of Texas at Austin from 1983 through 2007, and was provost of The King’s College in New York City from 2007 to 2011. He joined WORLD in 1990, and is holder of the Distinguished Chair in Journalism and Public Policy at Patrick Henry College. Link