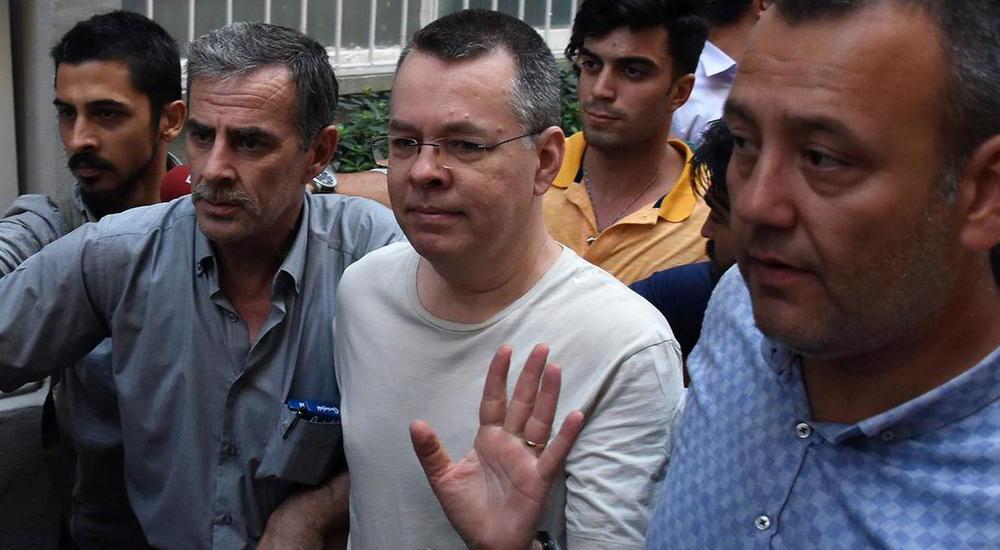 Andrew Brunson’s Plight Points to Our Own

Andrew Brunson’s Plight Points to Our Own

Andrew Brunson faces a court appearance in Turkey again on October 12. Having gone to the previous trial, Bill Campbell writes with personal reflections on what it all means.

Relations between the United States and Turkey seem to hinge on a single man: Andrew Brunson. The story of his two-year detention in Turkey has our country riled, Turkey reacting, and the world reeling. Most of the media coverage focuses on the politics that have transformed this pastor-turned-prisoner into a pawn.

There is another way to look at this international showdown. If we turn the spotlight away from the American and Turkish presidents to the populace, we see an angle that becomes somewhat personal. Stated concisely, Andrew’s plight highlights a spiritual problem. I am not talking about a clash between religions; I am talking about the gradual erosion of America’s faith.

I am a pastor in the region Andrew Brunson calls home. It was with a sense of obligation and a hope to encourage him and his wife that I attended his most recent, July 18, trial in Turkey. I came away with a new perspective. I saw in Andrew and his wife, Norine, and in the Turkish pastors who attended, something that we are rapidly losing in America. I was with people who so embraced their Christian convictions that they were willing to put their lives on the line to keep them. The pastors attending Andrew’s trial had also served time behind bars for their beliefs. Being around them was life changing for me. It deepened my long-held Biblical convictions.

True convictions are not things we own; they own us. They grow and eventually glow once refined by fire. Such convictions gave birth to the early Church. They were also seen in the principled resolve through which our forefathers led a revolution and out of which America was born. For most of our history, such a depth of character and resolve continued to guide Christians. We may recall, for example, leaders of revival, abolition, civil rights, and social justice. Or, we may remember the student volunteer missionary movement in the early 1900s, when more than 20,000 missionaries sailed from our shores on the fuel of their belief, taking their coffins with them because they knew they would probably not come back alive.

The comforts of America have made our convictions cozy. Cultural experts have declared America a “post-Christian” country. Seventy percent of us register as Christian and yet where is the evidence that we are following Christ? Sociologists also label us a “post-modern” generation because most of us don’t believe in absolutes or definitive truth. Hence the confusion about what a true Christian should look like. The moral standards embraced by many who attend church are not much different than those who do not. The root problem is not a lack of morality, but a lack of commitment to beliefs from which morality arises.

It can be difficult to see what we have lost because it is so close to home. Some history about Turkey, however, is eye opening. Once called Asia Minor, the Turkey of Bible times was the cradle of Christianity. It is now the nation with the slimmest percentage of Christians. Paul spent more time doing ministry work in the Ephesus of Asia Minor than in any other city. Jesus’ closest disciple, John, later pastored in Ephesus. He was then exiled to the Island of Patmos, from which came his letters to the seven churches, each located in cities of ancient Turkey (Revelation 2-3). These letters have living application for today. Ephesus was warned that if they did not regain their first love for God, they would lose their light. Only ruins remain. Andrew Brunson is being held in the city noted for the persecution and killing of Christians, then called Smyrna. Persecution continues there, though the name has been changed (to Izmir).

Here is the point: America, the nation with the greatest number of Christians, can gradually become much like Turkey if we don’t wake up and live our faith with true conviction. And Turkey may experience a great awakening before God if we continue to pray, and if believers there continue to live with boldness. This same story is being replayed worldwide.

In his trial, Andrew Brunson boldly proclaimed his beliefs. The judge told him to keep his beliefs to himself, to which Andrew declared they were the reason he was in prison. Andrew proceeded to say that he forgave Turkish officials for persecuting him, even as Christ, dying on the cross, forgave us and continues to forgive. I listened to his words with amazement. The Turkish pastor next to me who was interpreting for me, paused to explain that he had offered himself as a witness for Andrew at the trial. I thought that to take such a stand could lead to repercussions in his life. What I know for certainty is that it led to repercussions in my life. I’ll never be the same.

I came away from a week in Turkey with a sense that I and others who claim to be Christians need to pray not only for Andrew’s release from Turkey, but for our release from materialism and half-hearted, lukewarm Christianity. I already knew I needed such a release, but visiting Turkey and seeing the plight of Christians there first-hand, was for me the opening of a prison door.

The Table For years, my wife and I complained about our dining room table. Some…

Citizen Tip: Travel Light It was my first trip to Asia and I overpacked. Halfway…